Skip to content
Aiden loves sitting up, but in the past, when we’ve put him in his bumbo seat he SCREAMS. This week he finally sat in it pleasantly for about 5 minutes. Progress!

Again, he loves standing but this another toy where he hasn’t quite found the full joy. Maybe it’s because his feet don’t touch the floor yet 😛 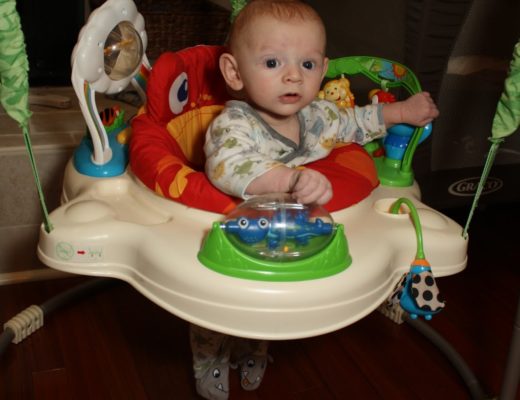 It’s been pretty cold here so I’ve been pushing Aiden around the house in his umbrella stroller, which may not be boring for him, but I’m over it. So, I found a great place for my iPad and a way to entertain myself while making 20 laps through the kitchen. I watch Netflix, check email and browse Pinterest. 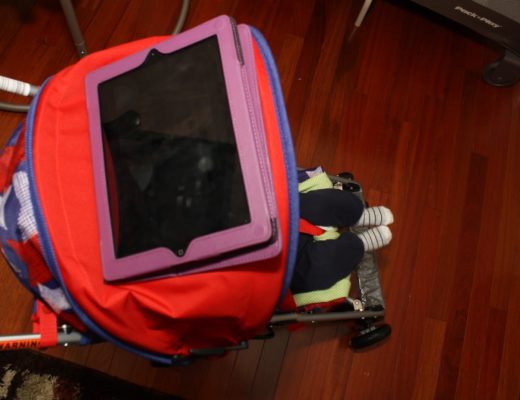 Aiden is still getting swaddled at night but during the day I’ve been trying to get him to sleep without it, mostly successfully. Sometime it takes a little extra convincing but other times he falls asleep with barely a single fuss. 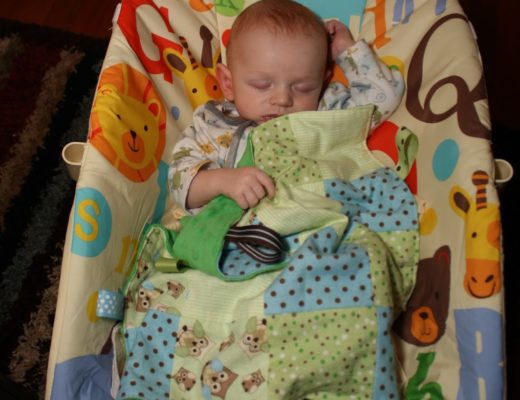 He’s constantly working those leg muscles with his dad. 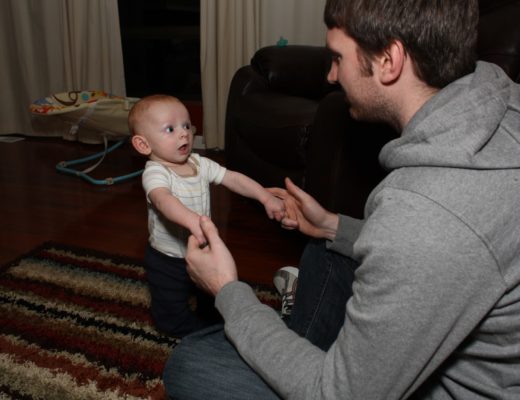 A rare moment when Aiden isn’t standing, sitting or sleeping… he’s just relaxing with Andrew. Of course he’s working on eating his fist, eating that dog’s ear and then settling down with his binky. 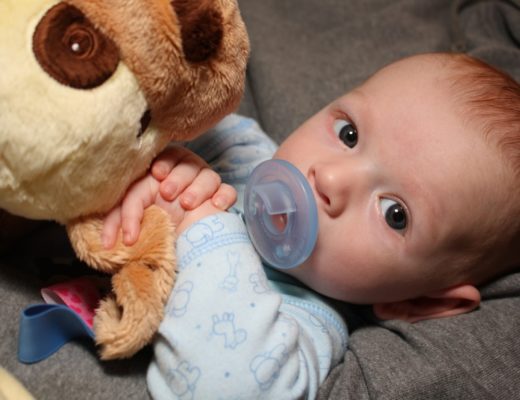 Cheering for IU together!
(Aiden really hates tummy time lately, this is about as close as he gets.) 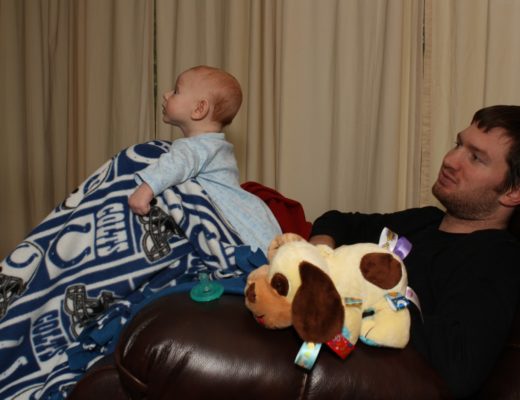 It has been three months since our little guy’s birth day. Yes, it is hard to believe. In some ways it has gone very quickly (because I can barely remember the first month or so) and in other ways it seems to pass by slowly (like when you count the day by number of feedings, or it starts at 4am and doesn’t end until 11pm). I would agree with what we’ve heard from other people, that the first 3 months are the hardest. In just the past couple weeks certain things have greatly improved. We’ve been getting out of the house a lot more. In fact, I’m pretty sure we left the house every day this week. We visited Emily, Debbie, Gabe and Nina. We toured several day cares, went to the grocery which always feels like a risky task with Aiden in tow, went to the mall and even had dinner out Sunday evening. All these adventures might explain why Aiden sleeps so well at night. And I even went back to Combat Conditioning for the first time on Thursday (I felt that workout for two days afterwards). I’d been doing some workouts at home using the Kinect and Nike Fitness which have been good, but it was very exciting to do something out of the house that was for me.

Aiden is officially registered to begin day care in March. We debated between day care and a nanny, initially we thought nanny. We even interviewed a couple of nannies, but decided that day care actually seemed like a better situation for us. We need care for about 6.5 hrs a day during the week because Andrew and I work slightly different schedules. With a nanny we would have been really tied to that time frame because of the hourly pay and not wanting to blow our budget. With day care we pay a flat weekly rate for full time care (10hrs) and although we have no intention of keeping him there any longer than necessary it would give us flexibility in our schedule to get an errand done or go to the gym without stressing about extra cost or another individual’s schedule, not to mention the added stress and effort it would take to be employers if we hired a nanny (that’s a lot of number crunching and we wouldn’t want the IRS after us if we messed up). I am glad we didn’t try to figure out child care before he was born. We would have had no concept of the realities of what to look for or consider. Also, seeing some of his personality has helped our decision and shown us that he would probably do well in a day care setting. Of course, we did discuss me staying home with him full time, but before I was pregnant, while I was pregnant and even after Aiden was born I have not pictured myself a stay at home mom. For several reasons it could easily make sense to go that route and be a great decision, and I know it will be tough to trust someone else to care for him, but for now I think we’ve made the best choice for our family.