Skip to content
We began ripping out our current fireplace right after the New Year. It took us roughly a month to complete.
It was wood burning and we never used it. We were planning to get a gas insert. But after doing all the demo work, we had the pros come measure for the insert. Once they were able to look into the walls, we learned that the fireplace wasn’t structural. We could remove the whole thing and get an entirely new fireplace. The perk to this is we could get a larger fireplace (for the same amount of money). I also pulled of part off the mantle that was running along the back wall, so I took this excuse to repaint the whole room (too ambitious? maybe). 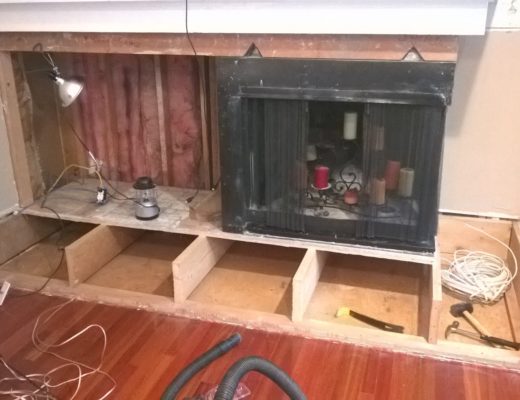 We had gas run to the where the new fireplace would be and I built drawers for underneath the hearth.

We added framing for the built-in entertainment unit that would replace the wood storage box. 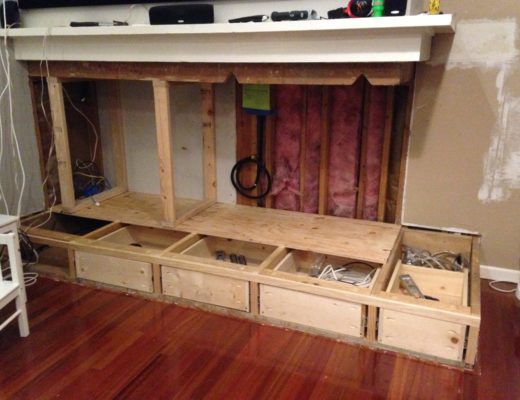 The installer put in the new fireplace and hooked up the gas. Since they were doing framing for the fireplace, we also had them add the cement board for tiling (it’s one our least favorite things to do).

I built drawer fronts. Andrew worked on wiring for the entertainment system. 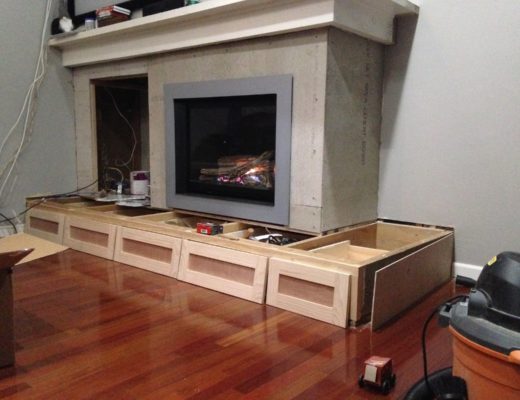 We waited to decide on a hearth until after the fireplace was installed. We wanted to have perfectly accurate measurements and know exactly how much space we’d have under the silver framing. Conveniently Andrew and I both had Martin Luther King Jr. Day off, but daycare was open. We used that entire day to go from stone yard to stone yard hoping to find remnants that might work for our space. We saw very little we liked, even when we did find remnants long enough. However, the very last place we visited happened to have one full sheet of marble that they were selling at remnant price because it was the last of a lot. Plus they could install within 2 weeks, unlike most the other places.
I painted and installed the drawer fronts before the hearth was installed. 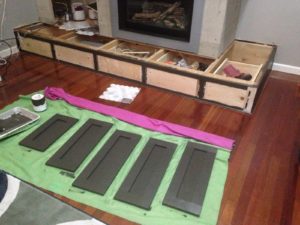 The hearth arrived! They struggled to get it in our front door and up the stairs, but eventually made it. One installer spent a lot of time measuring, going up and down, and shaking his head at the staircase before bringing the piece inside. 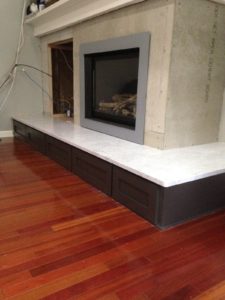 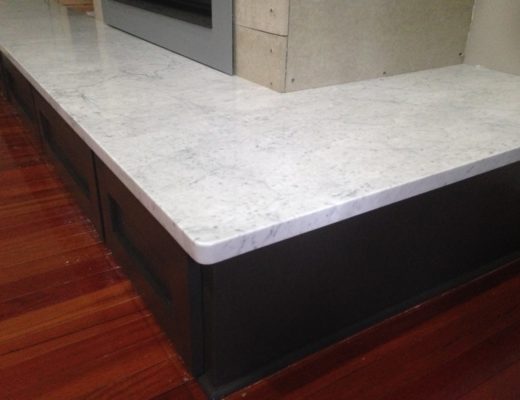 Next, we needed to decide on tile. I probably brought home 8 options, and we narrowed it down to each of our favorites. Andrew’s pick was the right option (horizontal) and I preferred the left. I agreed to pick the right option if we laid it vertically. 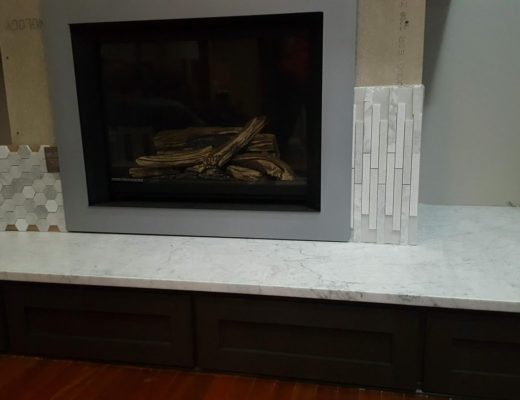 Andrew and I build in the box and shelves. The shelves can slide in and out, and there’s a 4 inch gap in the back for running wires. Andrew’s done a lot of behind the scenes work here to discreetly connect speakers, receiver, projector, internet, and all the gaming systems. 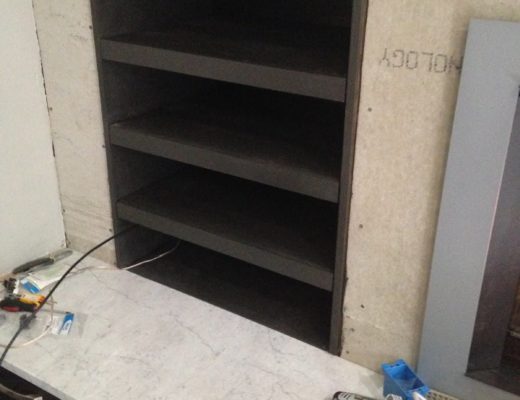 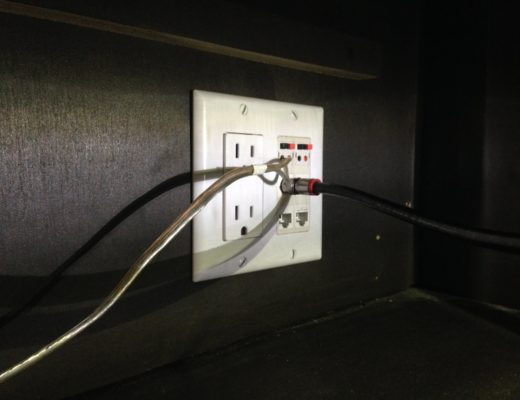 Ana came over to take the boys out for the afternoon and we tiled in about 4 hours. 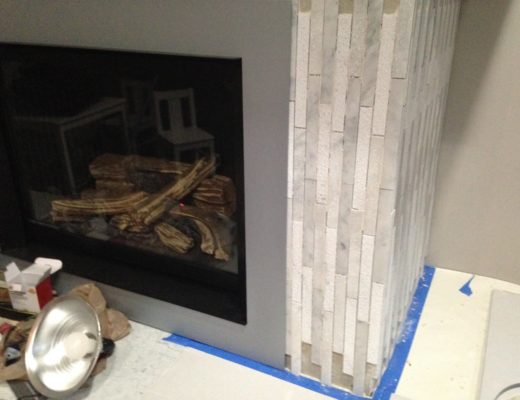 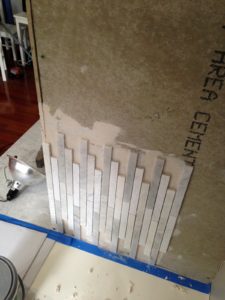 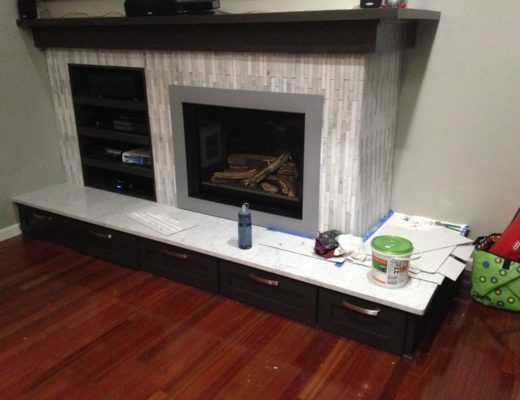 I was able to grout the next day while everyone was at work/daycare. 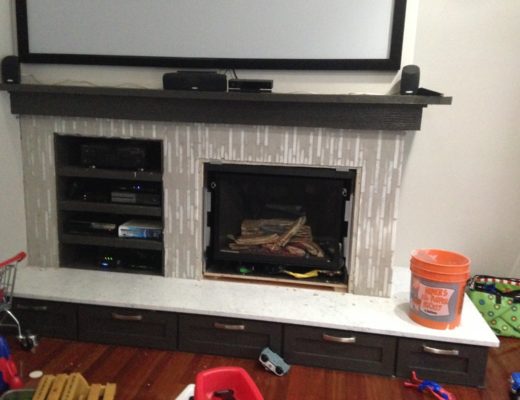 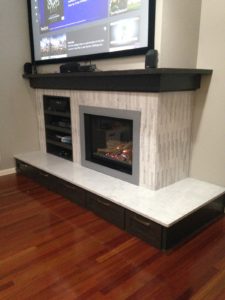 The final piece was adding doors to the entertainment stuff. 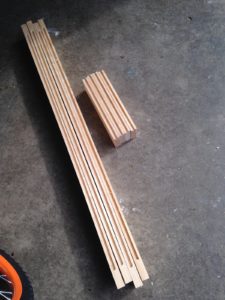 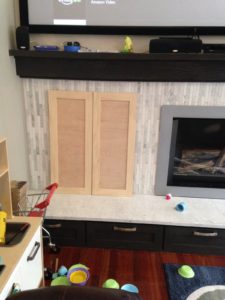 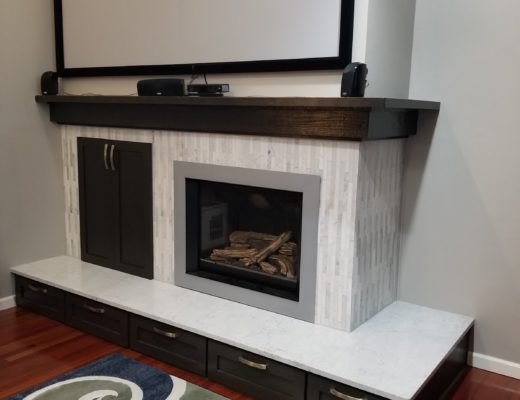 Here’s the before photo.